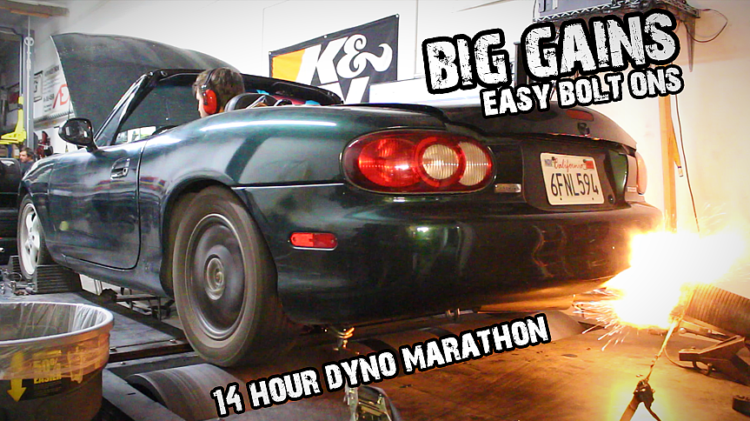 Baby steps. Although I was only chasing 3HP at a time through the entire day, the end result was fantastic, and this is only the beginning! Here are what I consider the most important dynos and overlays for the day, if you have any specific questions feel free to drop a comment on the YouTube video! (Click any of the images for full screen/full resolution).

Not much to see here, but the baseline dyno run is super important so changes can be seen from day 1. I included the AFR curve for the stock tune, it starts off pretty lean at 14.7:1, and by redline it’s too rich at 11.6:1. Once the ME442 standalone ECU goes in, I’ll be able to fix that for some easy gains.

VICS, or Variable Inertia Charging System, is a feature of the 1999-2000 Miata intake manifold. It uses a set of butterflies that opens and closes to optimize airflow at different RPM. With a standalone ECU, you can set the opening and closing points. Those points are easily determined by doing a dyno pull with VICS off, doing another pull with VICS on, and seeing where the torque curves cross. Those are your crossover points! Below 3200 there’s not much of a difference either way, but then the torque starts to climb. Above 6000 the power starts to fall rapidly with VICS on, so that’s your second crossover point. As the engine becomes more modified these points can change, so I’ll re-do this test later on.

100% stock California NB1 (dual cats) with only a 91 octane dyno tune. The AFR has been corrected (blue) to sit at ~12.8:1 flat, and ignition timing has been optimized for the fuel, which was about 10 degrees advanced over the base map. (Don’t blindly use this number, every engine is different and too much advance can lead to engine-damaging detonation). The dip in the beginning of the AFR curve shows that the acceleration enrichment on low RPM throttle tip-in is set way too high!

The 3 intakes tested here are the stock airbox, the Racing Beat Intake, and the Autoexe Intake. I must say, I don’t think the 0.95whp gain is worth the $650 price tag! (Which is why I borrowed this one from a friend) It does look cool though. Fear not, in the next dyno day I’ll be showing you how to make an intake that will make more power than all of these, and be less expensive. A little more on that later. Since the RB intake is the one I own, I’ll be keeping that on for the rest of the day. To 123.3whp and beyond!

The next stealthy mod has been popular for many years. The NB2 (2001-2005) got an improved, header-style exhaust manifold that is less expensive than name brand headers but still offer notable gains. The best part is it’s Smog legal (you need to relocate the factory downstream o2 sensor behind the 2nd cat) and uses a factory heat shield. You can pick up a beautiful one like the one in the video from Treasure Coast Miata, and they include new gaskets, NB2 EGR tube, heatshield, studs, and nuts all in great rust-free condition. Peak gain here was 3.3whp.

As I talked about in the video, in an effort to save time I needed to swap in the first set of aftermarket headers (Believed to Maxim Works) with the ISR Exhaust. As I expected the gains were not massive, as exhaust systems on Miatas really don’t start helping much until you get into the higher horsepower levels. Another 6whp overall though, now we’re getting somewhere! (And keep in mind this is 9whp over the completely stock exhaust, shown in red).

The rumors are true. the 4-2-1 headers lend a slight midrange advantage against the top end gains of the 4-1 Racing Beat Header. Slight AFR tweaks were needed here for the additional airflow. This was the final parts combo for the day, but Toby at Advanced Engine Dynamix had an extra trick up his sleeve.

From high up on a dusty shelf in the back of the shop, came the mystery intake. This thing has apparently been handing out gains for over 10 years, and it made me realize there’s a bit more to intake science than meets the eye! This beast gained over 4whp over the Racing Beat intake, and from the research I conducted after this session it’s not from the MAF delete (The pressure drop has been tested across the MAF before and it’s negligible). Apparently there’s a “perfect” length of tubing that needs to precede the throttle body, and it varies based on the engine and parts selection. I’ve purchased some various intake bits to try to recreate and possibly even beat out the unicorn intake here, that’ll be for the next session. Until then, here’s a forum post containing some of that valuable information regarding Miata intakes:

Final Gains For The Day

I know it’s only been 3hp at a time. I know it’s been a long day. Many people probably won’t make it this far down in the page, but thanks if you’re here. You passed the test! You won! The Chocolate Factory is yours Charlie! This chart looks a little more rewarding, 100% stock vs. our final numbers for the day. +23whp, +12wtq, and the car rips. It doesn’t sound like a lot, but compared to stock it really feels like it’s awake now. Next dyno session will have 4 more common bolt ons, and I’m shooting for 155whp. It’s optimistic but I think we can get there! And don’t worry, spray is in the queue.